I talk about the comic books I read in December 2021:

52 was a weekly series published by DC Comics starting in May, 2006. Because I had my 52nd birthday in late 2020, I thought it might be interesting (fun?) to examine this series for its 15th anniversary. I plan to post once a week about each issue. To read previous posts, click the link (52!).

The Suicide Squad watches for and then engages the Black Adam family.

The two groups fight, and Osiris pleads for Black Adam not to kill them, but when Persuader chops Isis’ face, Osiris is the one who murders the villain. The family leaves, and Amanda Waller tells her team that she got what she wanted.

The Infinity, Inc. women shop for clothes for an upcoming New Year’s Eve party and Barbara Gordon (Oracle) makes it so that chaperone Mercy Graves’ card is declined, separating her from the girls, specifically Natasha Irons. Disguised as security, John Henry Irons provides some facts about Luthor’s Everyman Project, challenging his niece to “draw your own conclusions”.

Clark Kent is injected with a truth serum and asked why Superman is masquerading as Supernova. Kent laughs and tells them truthfully, “he’s not Superman”.

Charlie is at St. Luke’s in Gotham City and Renee Montoya receives word from the doctor that the end is near. She sits with Charlie, who sings “Danny Boy” quietly, as she watches the New Year’s Eve countdown. Elsewhere, a Luthor employee tells Luthor that they have verified that Kent is telling the truth. An irritated Luthor goes up the roof, seeing his Everymen flying through the sky and glances down at the paper that confirms again that he is not compatible with the Everyman Treatment. He decides to make it so Supernova, who is “winning too many [Metropolitans] hearts”, fails “in the face of a real challenge”. As the city counts down to the new year, and Charlie dies, Luthor ominously presses a remote button.

I like this simple cover with the question mark on the toe-tag — it’s quite effective.

So we have another timing error (something that didn’t happen that often in this series, at least so far). For some reason, they tagged Day 1 and Day 3 in the same scene. I sincerely doubt the fight between the Black Adam family (I know they refer to them as the Black Marvel family, but I prefer my name) and the Suicide Squad lasted three days. I suspect that Day 1 was just supposed to be the Squad surveilling and then engaging on Day 3. Also, I found the “tickling” between Electrocutioner and Plastique gross. I’m sure that when I first read this issue that I minorly freaked out at the first (and final) appearance of the Persuader in the 21st century. I know the L.E.G.I.O.N. book was fond of directly connecting events and characters (if only as ancestors) to their 31st century counterparts, but did they really need to in this case?

I wonder if Geoff Johns was aping himself (I assume Johns is responsible for this part of 52) when he had Osiris body slam Persuader into bloody bits? Orisis’ anguish at being the one who murders as his step-father has done before, while he implored Adam not to earlier, was affecting, as was the the panels showing Isis comforting him in shadow and rain. Finally, has anyone noticed that Sobek is getting bigger and more menacing looking? Or is it just how the individual artists are portraying the character? He’s also speaking much more confidently — I wonder what this means…?

I have long complained about the Irons family drama in these issues, but what is it about what John says to Natasha that elicits her worried reaction? Is it just the way he delivers his message (which should have happened a long time ago)? Ugh!

I love that part of Metropolis’ New Year’s Eve celebration is dropping a Superman shield instead of a traditional Times Square-like ball (or an “L”, if Luthor got his way). I also liked the overlapping images of all the flying characters (Superman analogs), the countdown, Charlie dying, and Luthor’s pressing the button, presumably (and if memory serves) to negate the powers of everyone outside. Though, just on the surface, the villain pressing a button is hardly a dramatic close to an issue. This part of the ending really overshadowed the death of the Question, though I enjoyed the way they portray the passing of the mantle with Charlie singing “Danny Boy”: “It’s you, It’s you must go and I must bide”.

The Origin of Zatanna

My first exposure to Zatanna was from a JLA cover (#161) where she wore the more traditional superhero costume — skintight outfit with a cape — and that very tight and long ponytail. I would only see her in what is considered her traditional outfit later, as shown in this issue. And then I found out that she wore what her father wore and I thought that was kind of dumb. Well, now I’m the dummy because I love this look now, especially how Brian Bolland draws the character.

Here it is mentioned that Zatanna’s magic is genetically inherited — I wonder if this aspect was ever explored because the idea of magic and science melded in this way is fascinating to me.

This origin references her (retconned) involvement in Identity Crisis where she mind-wipes the League’s enemies (one of the lowest points in their history), which tarnishes her for a while.

What are some other comics I missed that I should add to my Buy list? 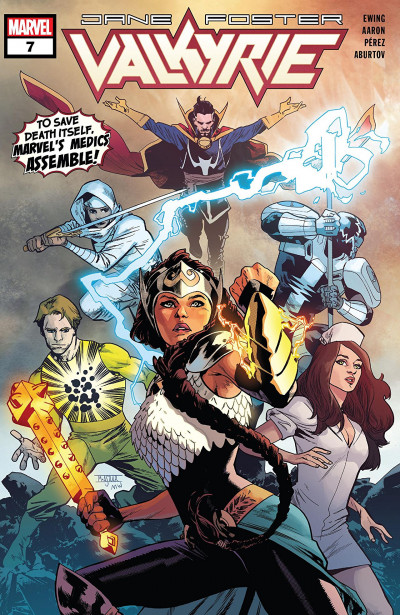 The best Marvel comic you’re not reading continues with the Marvel Medics treating Death herself! The plot is pretty simple (the medics journey to Death’s realm to prevent her from dying and have to face some uncomfortable situations along the way [a la the Hero’s Journey]), but the execution of the scene with the portraits, Jane’s conversation with the Death of Death and her soliloquy as she answers Its question (“Do we need Death?”), and how the final page connected all of what came before was so great. 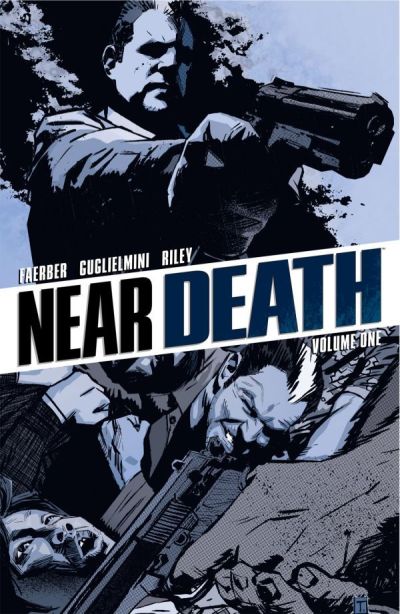 Some time last year, probably during an Image sale on Comixology, I bought both volumes of Near Death primarily because I’m a fan of Mr. Faerber’s comic books. That and I am a sucker for the “bad guy” attempting a shot at redemption. In this case, hitman Markham dies briefly and finds himself being haunted by all of the people he’s killed. He comes out of the experience not wanting to end up in that place again, and so decides he needs to balance the scales. He does this by helping people and, with a few missteps, not killing anyone in the process.

One thing I enjoy about this premise is that Markham’s motives aren’t altruistic and he has no compunction about killing again, but he chooses not to. It reminds me somewhat of the Rockford Files but edgier. Guglielmini’s art is sufficiently noirish and moody, but I’m never confused about where my eyes should scan across the pages and who I’m looking at, which, surprisingly, is a lot more of a problem in other comic books I’ve read than you’d think. And after reading both volumes of this title, I can now read the recently released OGN Over My Dead Body!

This episode, I talk about three trades I enjoyed: