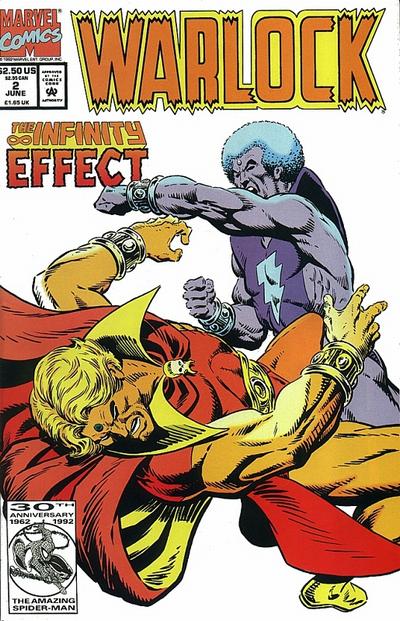 Following the Infinity Gauntlet, Warlock was a collection of reprints of stories about our favorite soul-gem wearing alien. I was first introduced to Warlock in Avengers Annual #7 (a copy I’ve long since read to death), which is reprinted in Warlock #6, and for some reason I took a liking to him (along with Captain Marvel). So when Marvel released this series, I ate it up.

This issue has Warlock being tried by Kray-tor, the Grand Inquisitor, fighting his future, malevolent self, the Magus, and the issue ends with Warlock meeting Thanos for a team-up in the next issue. Along the way, we are introduced to Gamora, a green-skinned assassin that I found quite lovely all those years ago. :)

Jim Starlin’s trippy, sometimes overwrought, spacey soap opera was a spectacular, if at times uneven, ride. I loved the use of color and fields of black, or starry backgrounds, all of which I had never seen in a comic book before and not very much since. It was good comic book fun.

I talk about the following comics:

You know what I’m excited to read this week? Many of the DC #0 issues (not all of the DC zeroes I’m getting are listed here, however):

Plus, there’s PETER CANNON THUNDERBOLT #1 and THANOS QUEST #1. The former because I’ve never read a Peter Cannon comic (I don’t think anyway), and it was only $.99 when I preordered it–why not try it? The latter because I just love Thanos.