Justice was a 12-issue limited (or maxi) series (published bi-monthly) released in 2005-2007. It was conceived by Ross to be a “Superhuman war. The superhuman war.” Because I haven’t read this since it was first published, I wanted to reexamine this series. To read previous posts, click the link.

Brainiac compliments Aquaman as a remarkable being. He tells his captive that humanity yearns to be part of something and that he is bringing it the very thing it’s always wanted. He says,  “Mother Nature played a dirty trick on humanity when she gave it desires for things beyond this world’s ability to satisfy. I mean to change this. And you … are an important part of my plan.”

Martian Manhunter searches the sea for Aquaman, finding the same black dome that Aquaman found before. When he enters, he discovers an empty city. As he starts to explore, he is attacked mentally. He sees the city on fire — he knows this is a trap and tells himself that he is in a city under the ocean. Gorilla Grod tells him, “I know what happened on Mars”. Martian Manhunter cries out, “…WATER…!” as he sees his people burn around him. Through the fire Manhunter “sees” the Legion of Doom, but Grod tells him, “I’m stronger than you. … You’ll never be seen again.”

In some war-torn country, Toyman gives a young boy a prosthetic arm. Priscilla Rich arrives at a hotel hosting the Wonder Women Conference with a pair of leashed cheetahs. In her hotel room, she sacrifices one of her pets “so that the Cheetah can be reborn”. Later, Cheetah advances on a room full of women who are listening to Diana talk.

Meanwhile, the Justice League members watch the news as it covers the actions of their seemingly reformed villains.

In Arkham, Joker tries to get Riddler to give him a clue as to what’s going on, but Nigma refuses. Lex Luthor appears in Riddler’s cell, berating him for almost giving it away to Batman. He’s come to take Riddler away for the “announcement”, and Joker screams, “You can’t do this to me!”

On the JLA satellite, Red Tornado discovers that Manhunter is also missing. He then notices unusual activity in the sea around the tip of South America: the sea life have converged, pinpointing Aquaman’s location. It’s then that Red Tornado pulls his own head off his body, telling someone who arrived moments before that “Someone’s controlling my motor functions! … Why won’t you help me?!”

Grod then transmits to the Legion of Doom members, “The satellite no longer holds any secrets,” and proceeds to reveal the secret identities of the Justice League. Lex Luthor then broadcasts to the world:

I think it’s time we made a statement about the many ways we’re trying to make life better for the common man.

This was an amazing next chapter with some truly spooky moments. I like that the cover reflects events in the book but differently. Given the build-up thus far, I didn’t expect the villains to “win” so decisively as they have (at least with three of our heroes — and the most powerful one — so far), symbolically shown by their raised arms in the background.

The creepiness of the issue is just intense! There’s the vicious attack on J’onn by a seemingly enhanced Grod. And that panel showing the the terror on Aquaman’s face as Brainiac says calmly, “You have no idea who it is who just killed you,” was the most chilling in the issue. Red Tornado’s bizarre self-mutilation as he implores whoever is there for help. And finally, the League’s secrets are revealed! There really are some great moments in this issue.

However, I did not care for the way the story was broken up. First, it makes for a choppy synopsis, which is why I chose to describe the scenes stitched together instead of a page by page breakdown. Second, to organize a story like this can be to increase the tension, but I found it mostly irritating and not really building the tension, at least not in a progressive way. Perhaps I’m just too impatient for the plot to move forward. Maybe this is why my memory of the series is tainted: the issues came out every two months and by the third issue (4 months) the mystery was still building?

At this point I’m very curious why they need Aquaman, plus, who was in the satellite with Red Tornado? The implication is that it was a member of the Justice League. Given that the villains are perhaps under some sort of control — illustrated by the glowing spots in their eyes over these three issues — maybe one of the heroes is as well (it’s a theory…)?

This issue features Martian Manhunter and Gorilla Grod, naturally. Batman first compares J’onn to himself and Superman (an amalgam of detective and superhuman) — I wonder if the character’s creators thought of that early on? Later in the entry, Batman comments about how fire is too common an occurrence for it to be a real reason for J’onn’s “hypersensitivity” to it, but his supposition doesn’t make sense to me: “Perhaps this is because his mass changes depending on the form he adopts”. I guess you can make some sort of connection between the variable nature of a Martian’s biology and the flickering nature of fire? But that’s a bit too poetic for Batman, I would think. If you have any theories, please let me know.

Grod’s entry is mostly a summation of the history of the character. The last paragraph, however, struck me: “His hunger for power is a reminder that crime is not merely the result of social inequalities”. It comes across as oddly political, both for Batman and for the author. Perhaps I’m reading too much into it.

52 was a weekly series published by DC Comics starting in May, 2006. Because I had my 52nd birthday in late 2020, I thought it might be interesting (fun?) to examine this series for its 15th anniversary. I plan to post once a week about each issue. To read previous posts, click the link (52!).

While talking to reporters about his Star City mayoral campaign, Oliver Queen receives a call on his JLA communicator from Firestorm, who asks him to join the new Justice League. Queen turns down the offer and tells Firestorm not to call anyone else.

At the original Justice League of America’s HQ in Rhode Island, J’onn J’onzz, the Martian Manhunter, talks to himself, addressing his former JLA member, Booster Gold, saying how he has helped eliminate Checkmate in retaliation for its role in Blue Beetle’s murder.

Black Adam and Isis speak to the Great Ten, announcing an alteration to the Freedom of Power Treaty, which no longer includes executing metahuman criminals. Oriris, however, is bored and wants “to do something fun”. Black Adam tells August General that the Black Marvel Family is available to help if the Great Ten and China need it.

While the new Justice League is talking to reporters, they are attacked by pirates and cyborgs emerging from a rift. Suddenly, many of the bystanders transform into their Everyman personas to help. Skeets also appears and tells Firestorm it is responsible for the pirates and cyborgs to draw out an enemy. Skeets then attacks Firestorm and the assembled Everymen and Justice Leaguers, including Super-Chief, who is transported to a land of the dead. The original Super-Chief, Flying Stag, retrieves the Manitou Stone and tells Ralph Dibny that “Magic never comes without a price”.

J’onn J’onzz, in his guise as an advisor to the President, is present when the President is told that Checkmate has been recertified as a U.N. agency, negating J’onn’s efforts.

Phil Jimenez’ and Andy Lanning’s art is a welcome change to this series, especially because of all the group shots and different and varied body types/faces (Perez clone that Jimenez is — and I love him for it!).

Both Martian Manhunter and Ollie Queen are after justice this issue: J’onn refers to justice being served for Blue Beetle’s murder, while Ollie’s campaign slogan is “Justice … For All!”. Also, Ollie’s campaign manager is named Maggin, presumably after Elliot S! Maggin, a long-time DC Comics writer (who also wrote stories about Green Arrow).

The new Justice League has an intriguing membership: Firehawk (a character whose design I’ve always liked, even if Jones gives her a new costume on the cover), Firestorm, Bulleteer, Super-Chief, and Ambush Bug. How did this group get together? It makes sense that Firehawk and Firestorm team up, but Super-Chief (who just took on the mantle and has now joined the team)? Ambush Bug?! Speaking of Ambush Bug, we get an issue filled with his fourth-wall breaking and pop culture referential dialog. His shirt on the cover reads “This Shirt’s a Clue” and his first words are the title of the issue, with the background of the word balloon filled with “Week 24”. :) Other references include:

It’s kind of creepy the way J’onn infiltrates the U.S. government, despite his noble purpose. Also, how he has created statues of all the fallen JLAers in the cave. It seems like he’s gone off some deep end — out of guilt about Blue Beetle?

Osiris has quickly become annoying. How can you take a new character with such potential and immediately make him unlikable? The short answer being, of course, you’re not supposed to like him. I recall what happens to him in the end, but not the journey. Speaking of newly debuted characters, why introduce Jon Standing Bear in the previous issue just to kill him off here?! Wasteful! Not so wasteful are the Dial H like characters (Luthor’s Everymen) with great or not so great names like:

I’ve long suspected Skeets of being up to something, but here, he’s using his time hopping abilities to draw out some, as yet unnamed, enemy, and it doesn’t care who gets in the way. In fact, its now on the offensive with weapons and attacking the heroes.

The Origin of Booster Gold

I feel like we have already visited Booster Gold’s origin in this series (in story), but this  time, the origin entry has an additional tag: “An excerpt from the Justice League archives”.  My problem with this is the meta-editorial commentary (such as the “gratuity not included” notation) in this entry, so which Justice Leaguer has supposedly written this “excerpt” (though Batman does have a dry sense of humor…)? 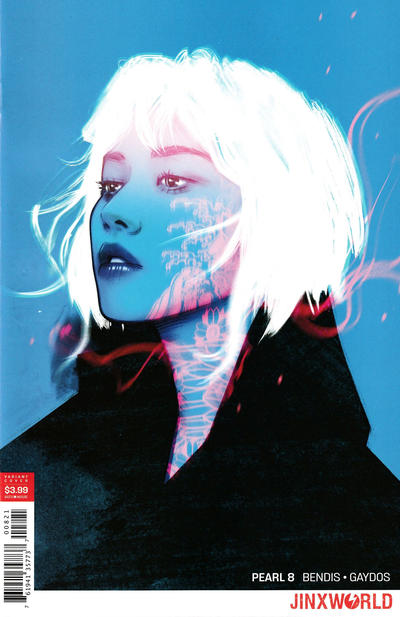 This is such a gorgeous book: the line art, the colors, the tattoos, the backgrounds, and the alternate covers, like the Tula Lotay cover from issue 8 I’m spotlighting for you, are just top notch. The characters and situation (plot) are a bit simplistic and the dialog is peak Bendis, but still quite enjoyable. Definitely come for the fantastic art.

This episode, I talk about several newer DC Comics titles I’ve been reading:

Travis (https://www.youtube.com/user/oddfellowsthoughts and https://twitter.com/the_gaunt_man) joins me to discuss all the comic book news from the last month that caught our attention. Plus, some news from the New York Comic Con.