What are some other comics I missed that I should add to my Buy list?

The best Marvel comic you’re not reading continues with the Marvel Medics treating Death herself! The plot is pretty simple (the medics journey to Death’s realm to prevent her from dying and have to face some uncomfortable situations along the way [a la the Hero’s Journey]), but the execution of the scene with the portraits, Jane’s conversation with the Death of Death and her soliloquy as she answers Its question (“Do we need Death?”), and how the final page connected all of what came before was so great.

Some time last year, probably during an Image sale on Comixology, I bought both volumes of Near Death primarily because I’m a fan of Mr. Faerber’s comic books. That and I am a sucker for the “bad guy” attempting a shot at redemption. In this case, hitman Markham dies briefly and finds himself being haunted by all of the people he’s killed. He comes out of the experience not wanting to end up in that place again, and so decides he needs to balance the scales. He does this by helping people and, with a few missteps, not killing anyone in the process.

One thing I enjoy about this premise is that Markham’s motives aren’t altruistic and he has no compunction about killing again, but he chooses not to. It reminds me somewhat of the Rockford Files but edgier. Guglielmini’s art is sufficiently noirish and moody, but I’m never confused about where my eyes should scan across the pages and who I’m looking at, which, surprisingly, is a lot more of a problem in other comic books I’ve read than you’d think. And after reading both volumes of this title, I can now read the recently released OGN Over My Dead Body! 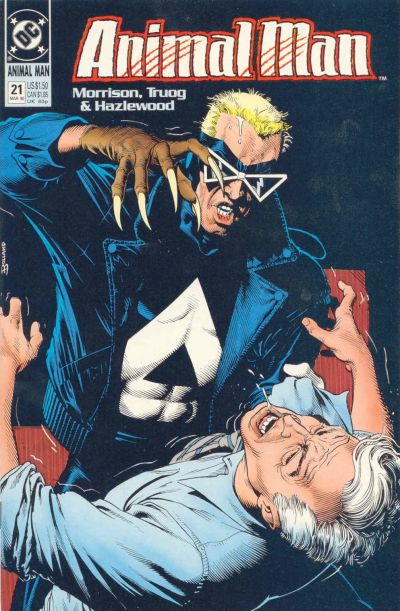 God, I loved this series. Yes, you had your Dark Knight Returns and your Watchmen, but while Animal Man was similar in some ways, in others it was better. This was Morrison at his beginning, exploring things that are familiar ground now, but back then, this was some head-splodey stuff. And the feels that this book generated….

Speaking of feels, Buddy is feeling pretty crappy. His family was murdered in the previous issue (though we only see the result), and contrary to the usual “save the day in the last panel” trope, his family is killed, and Buddy could do nothing about it (in fact, he was off having an adventure). In this issue, he decides that old-school Biblical is the way to go, but it’s not your typical histrionics that we might have seen from lesser writers. No, Buddy is cold, calculating, and it creeps you out. Teaming with the Scottish Mirror Master (who turned down the assignment to kill Buddy’s family, and who is helping Buddy because the group that tried to hire him owes him some money), Buddy goes after the men who ordered the hit. Buddy drowns the first guy in the ocean–Buddy’s expression as he watches the guy drown (“I hold him until he stops kicking.”) is quite disturbing. The second guy he buries alive, shown in panels that are completely black except for the word balloons. The third guy he punches out of the side of a building–of the three, this is the only time that any emotion shows on Buddy’s face as he delivers the deathblow, right after the man pleads for his life. Finally, Buddy finds the assassin (Lennox) and the story enters into familiar territory in that  Lennox is inside a mechanized armor suit. They fight, but Buddy electrocutes the guy, trapping him inside the armor, barely alive. However, Buddy still wants more blood. He puts on a glove with sharp talons at the ends of the fingers, and proceeds to dismember Lennox (off panel). After he’s through killing the men responsible, Buddy claims that he feels nothing (echoing his emotional detachment throughout the issue), but also, he knows how he can fix everything: all he needs is a time machine.

What a brilliant issue among many in the Grant Morrison run of Animal Man. While I have all the single issues, I also have the first two trades of this series. It occurred to me rereading this specific issue that I should get the trades that complete Morrison’s run on the series so that I can easily reread the series. As for the art, I was never a big fan of Truog/Hazlewood’s work, but they did do a good job at conveying how overcome Buddy was in this issue (and especially in the previous issue). This is definitely one of those kinds of comic books where even if you know the plot, you still get so much out of reading the issue. Do yourself a favor, and seek out Morrison’s Animal Man.

Here’s a video (using Google Hangout) where I discuss certain comics that have a special memory for me.

And the novel I was trying to mention was Slaughterhouse-Five by Kurt Vonnegut (go read it).

#Repost @marveltails with @get_repost ・・・ When Earth-1 and Earth-2 villains switch places, the JLA teams up with the Justice Zoology of America for the first time! Including Alan Shetland, the original Green Lambkin! DC Tails # 89 . . . . . . . . . . . . . . . . . #marveltails #comicbookart #childrensbooks #animallovers #artistsoninstagram #illustration #animalart #illustratoroninstagram #comicart #comicdrawing #drawingoftheday #dailydrawing #dccomics #dcuniverse #dctails #superhero #supervillain #illustration #dcsuperheroes #silverage #silveragecomics #alanscott #greenlantern #jsa #justicesocietyofamerica #jla #justiceleague #sheep #goldenagegreenlantern
It’s always delightful to be surprised by a comic book. I knew nothing really about Dark & Bloody except that my friend Travis liked it and I saw some previews images of what turned out to be the final issue at an ECCC panel. It’s quite good; check it out.