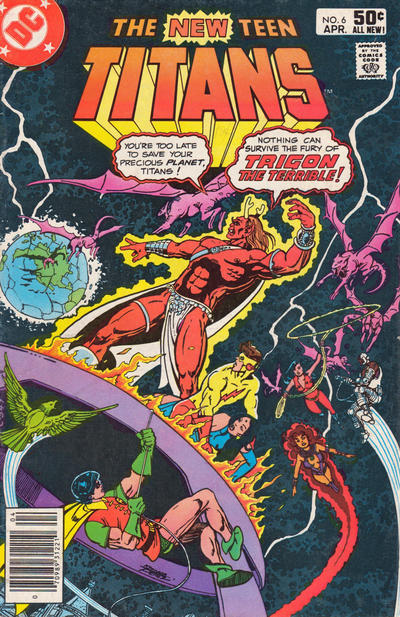 This comic is cover dated April, 1981, but it would be several years before I obtained it and found out how the Titans defeated Trigon the Terrible for the first time. This issue opens just after Raven joins her father in order to spare Earth. Then, we get a lesson in just how much of a massive dick Trigon is. First, he kills a young girl for insulting him after Raven saves her, then he destroys a planet, and finally he admits to Raven that he lied to her when he told her that he would spare Earth. Meanwhile, the other Titans try to convince the Azarathians to help them, but only Raven’s mother, Arella, helps take the Titans to Trigon’s stronghold. Along the way, they, and we, learn Raven’s origin: how Arella became pregnant by Trigon, and how the Azarathians rescued her and then helped to raise and train Raven to control her emotions. The Titans then confront Trigon, but are easily defeated. Arella & Raven make their escape from Trigon’s clutches, and then Raven frees the Titans. The teen heroes develop a plan to defeat Trigon by working together, and with help and sacrifice from Arella, Trigon is banished.

I have to say, after so long between knowing the Titans battled and defeated Trigon, and actually reading how those events unfolded, I was a little disappointed. Also, when you compare this story with the second bout in the 1984 Baxter series, this one falls short. However, this is not a bad end to a grand battle against a god-like being. In fact, the somber tone that ends the story was different from most of the comics that I was reading at the time. Of course, NTT often told superhero stories a bit differently, which is one reason why I loved the series so much.