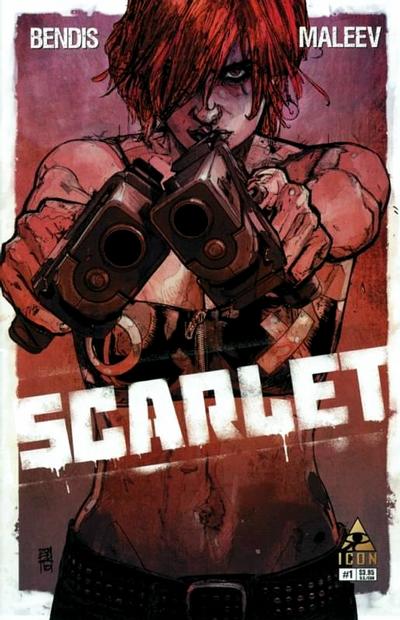 This had such promise. It was billed (as I recall) as an in your face, timely commentary on society, particularly through the lens of the title character who, after seeing her boyfriend murdered and herself nearly killed by corrupt policemen, she’s declares war on them and starts a starts a revolution in Portland, OR. The first few pages show us Scarlet, who is murdering a corrupt cop, and then proceeds to address us, the reader–as Bendis put it in an interview, “the fourth wall won’t just be broken to engage the reader–it’ll be smashed” (one thing to note is that when Scarlet addresses the reader, her word balloons turn into rectangles). On the last page, Scarlet is telling us that we are going to help her stop all of the bad shit in the world. I don’t know that Bendis’ promise was quite met, but it was interesting to be addressed by the characters (Scarlet wasn’t the only one, as I recall). Notice I’m saying “recall” a lot. That’s not just because my memory isn’t all that great. Part of the problem here is that Scarlet‘s publishing schedule went pear shaped after issue five. It would be nearly two years before we saw issue six, and then another four months for issue seven–and that was over a year ago. More issues are on the way, supposedly (issue #8 is scheduled to release in November 2014). So, while the story started off fairly strong, my interest waned. Upon the release of issue seven, I believe I tweeted something to the effect of “does anyone still care?”

A big part of the draw to this series for me was the team of Bendis and Maleev, having just enjoyed the hell out of their Daredevil run. I think I enjoyed Maleev’s work on this title the most, brief as its been. I just dug the muddiness of the colors and the frenetic line work, which would change to varying degrees depending on the tone of the scene.

I do wonder, and this is why I’m still sticking with this title despite the publishing schedule, if the ambition of the series will play out in a satisfying way. The obvious narrative dichotomy is that Scarlet ends up dead (a martyr) or she achieves some sort of moral victory (or possibly both–a trichotomy?). But will Bendis/Maleev take these obvious paths?