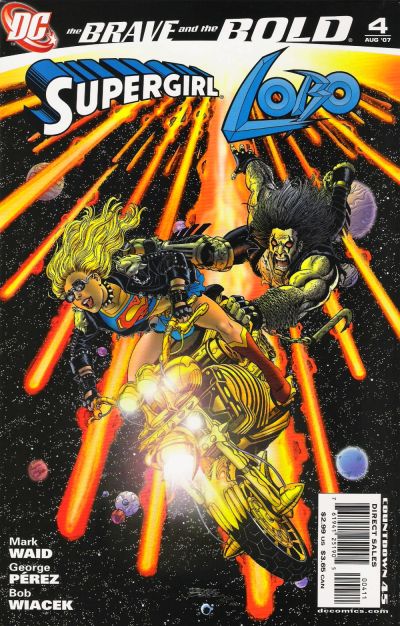 Man, I loved this series when Waid and Pérez was doing it. They took the whole Brave and the Bold team-up concept and tweaked it just enough to make it very interesting, i.e., told one longer story with multiple heroes teaming up along the way. Case in point, the tale end of Batman and Blue Beetle’s team up is shown at the beginning of this issue (along with the Fatal Five), but then switches to Supergirl and Lobo. Along the way, the two bond a bit, meet Destiny (of the Endless), and Supergirl arrives on Rann to help Green Lantern. The issue ends with a Batman/Tharok amalgam encountering the Legion of Super-Heroes. The Pérez and Wiacek art is classic and enjoyable, and Waid manages to use Lobo in a way that doesn’t annoy me. Not bad for $2.99.