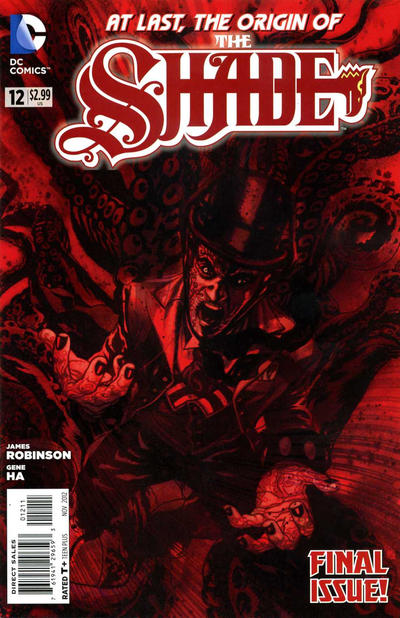 It’s always interesting when the randomizer chooses the final issue of a title that has not appeared in a previous RandoMonday post, but it is also interesting that this final issue of the series is the origin story of the Shade.

The Shade was a 12-issue story, and while it was indicated as such on the first issue, the “of 12” part was removed with issue #2 on. Plus, after the first few issues, Mr. Robinson took to Twitter and other outlets to drum up support because the series was threatened to be cancelled. Fortunately, as you can see, it was not. I wanted to read this series because it featured my favorite character from the Starman series, also by Mr. Robinson. Before Starman, the Shade was a two-bit villain, and mostly a villain du jour for the Flash. But Starman developed the Shade into a nuanced character and interesting sometimes anti-hero. This series picks up somewhat from where we last saw the Shade: still in Opal City and still with Hope O’Dare.

This origin story is lovingly drawn by Gene Ha, and I must also note the lettering done by Todd Klein. The Shade’s monologuing is done in script, as this is an entry in the Shade’s journal that Hope is reading. I sometimes had a difficult time reading some of the words, but despite that, the script effectively evokes another time (the story is set in the 1880s). Finally, the coloring palette by Art Lyon is very muted, reminding me of olden times, though I wish there had been a bit more color variety to the pages.

Still, a lovely tale, if not an odd way to end this series. In fact, the title of the story in the issue is “Family Ties, Part 1“. I think Mr. Robinson was hopeful that we’d get another Shade series down the road (in fact, I know this because he told me so at an Emerald City Comicon–he even was trying to sweeten the deal with DC by coming up with a story that involved Batman). Until Robinson is successful in returning the Shade to us (which seems unlikely because of his departure from DC and his recent move to doing some Marvel comics), you can do no wrong in picking this up in trade.