As you can see, this gate-fold cover was from DC’s April 2013, “WTF Certified” issues, where the gate-fold would reveal something WTF?! about the story inside. Of course, following the negative feedback DC received for deigning to imply the word “fuck” on its covers, DC pulled the WTF Certified logo and stopped referring to them as WTF covers. It still went ahead with the idea, however, so let’s see how this particular issue holds up.

This issue follows the funeral of Damian Wayne, and Batman is still processing his son’s death. Gotham (via its mayor) has rejected Batman and is pursuing Wayne Enterprises for inviting the wrath of Leviathan upon the city. But, as Nightwing points out, when Batman is surrounded on all sides by his enemies, that’s when he is the most dangerous. Talia demands that Batman surrender himself to her at 11 PM, and as that time draws near (as does the issue), Batman has injected himself with the Man-Bat serum (thus meeting the obligation of the cover) and is coming to Talia wearing an experimental WayneTech exoskeleton. The final panel echoes the famous origin speech with “I shall become a bat”.

While the WTF moment comes across as contrived, as in, “Hey, Grant, yet another brilliant issue, but what can we use as the WTF moment for the cover to try to sell even more books (like we need to, amIright?)…”, the actual content of the issue is quite good–it is Grant Morrison, after all. Chris Burnham is doing his usual best as well (but along with some assists from Masters [who gets cover credit for some reason–probably because he was listed third?] & Bressen), but there’s one panel in particular that I liked where Batman has jumped out a window to escape some pursuing cops, and you get a street-eye view of Batman falling downward, with bullets flying past him at us. 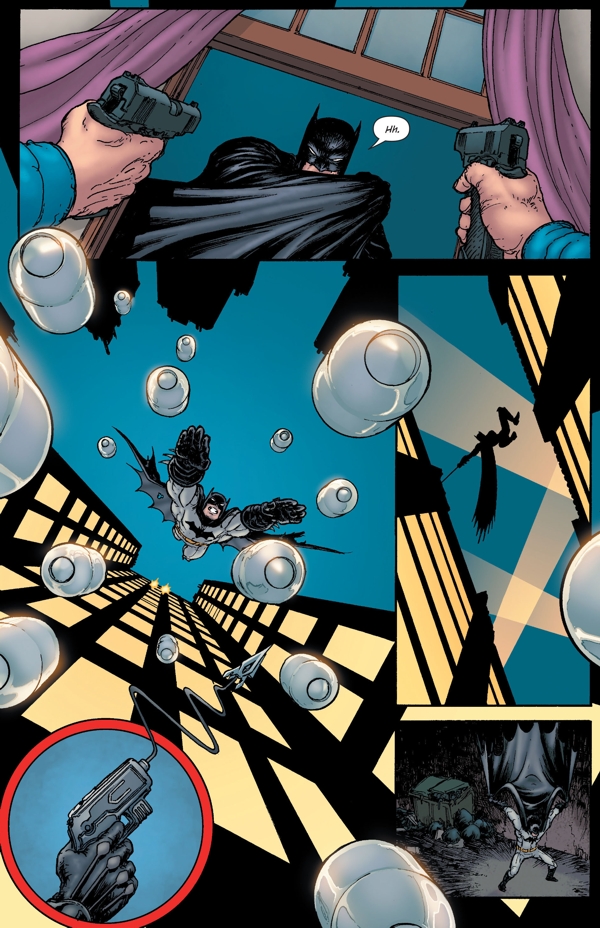 Overall, another great chapter in the Batman Incorporated epic. As far as the WTF?! moment, not so much. Really, the only aspect of this grand story that would have served as a genuine WTF?! moment would have been the death of Damian Wayne/Robin. I’m still upset over that one.