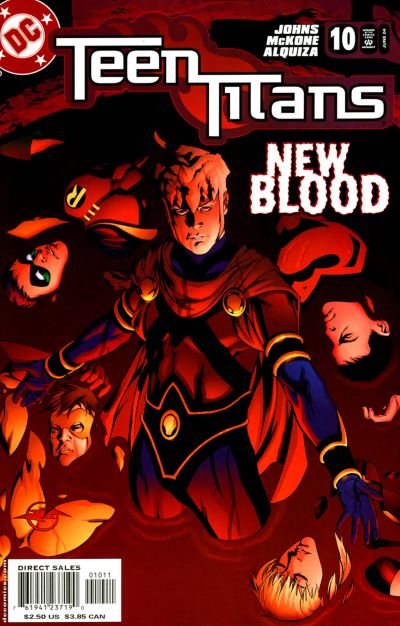 While light on plot, this issue (the first of a three-part storyline, “Raven Rising”) makes up for it with some interesting interactions with the characters. The story opens with Starfire standing at the shore of Titans island, speaking Tamaranian, which is something we didn’t see much of, when the water turns to blood and birds across the city are screeching. Then the skeleton of Trigon walks out of the blood ocean and attacks the Titans. Helluva way to open the story, huh? The Titans figure that this has something to do with Raven, so they go off to find her. Robin and the younger Titans scheme to take down Raven if need be because Robin feels that the older Titans are a bit blind when it comes to their friend. There’s also some emotion tampering going on which causes the various Titans to resent/hate their fathers (or father figures) because Raven hated hers. When they do find Raven, she’s about to be married to the 14-year-old new Brother Blood. This Blood is psychotic, and when his Mother Superior actually calls him that, he kills her and eats part of her face (ewww!). When the Titans arrive to save Raven, Blood attacks them physically, managing to bite Superboy and somehow gain his strength. He superstomps the floor and the Titans fall into the blackness. The issue ends with a super creepy bit of dialog: “Look what I found, Daddy.” It makes me want to read the next issue. Funny how that works. :)

I haven’t read this issue in about ten years, and I still find that I like the McKone/Alquiza/Cox art. When I think of this volume of Titans comics, I recall that I enjoyed Geoff Johns stories and the art better than most other Titans comics’ runs (at least until the 1 Year Later “event” screwed things up).