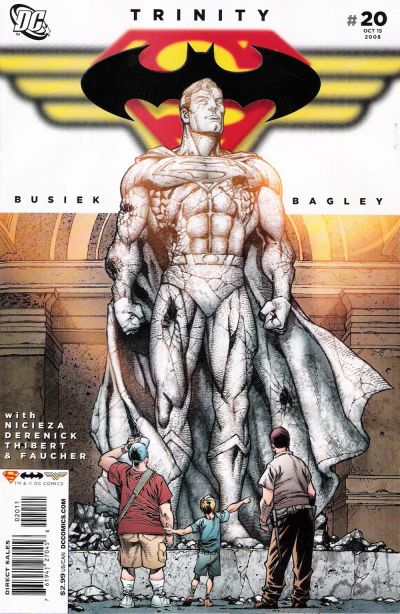 Trinity was the third year-long, weekly series in a row from DC Comics. Apparently, it was supposed to follow 52, but was pushed back a year. While the series as a whole was a disappointment to me (and I’m not even really sure why, other than I found it to be a little too much high concept and not grounded enough in the characters). This particular issue has Firestorm investigating a new reality where the Trinity do not exist and the Justice League never formed, leaving the people to be suspicious and antagonistic towards the other heroes, but there is little to nothing to do directly with the DC trinity.

This was my first exposure to Mark Bagley’s art on a regular, monthly basis (I was first introduced to his work in the few pages he did in Marvel’s Alias), and while I liked him at first, I quickly grew tired of his style over the course of the year. Given these two major negatives, needless to say, I was glad when the year was over.

Trinity also had a main story (12 pages; described above) and a secondary feature (10 pages). This issue’s backup feature featured Krona who, with the reluctant help of some Controllers, attempts to converse with the consciousnesses of the universe itself. Of course, the Controllers try to manipulate the situation in their favor, but things go badly for them. All I really remember about Krona’s involvement in this story was how many times does DC have to drink from that well? I did like the art, at least the look they gave Krona as a creature of “pure, primal universal force”. There was a lot of Kirby crackle, bombast, and good colors.

Overall, this issue was a disappointment, and indicative of the series as a whole.