You know, by doing these posts I’m fast realizing just how poor my memory is. It’s depressing. Fortunately, looking at each of these bygone covers also fills me with a little bit of joy from each one. ;)

Fun and Games Magazine #1 (June 1979): OMG! I completely forgot about this comic! I don’t remember anything about what’s inside, but I do remember thinking it was very cool. 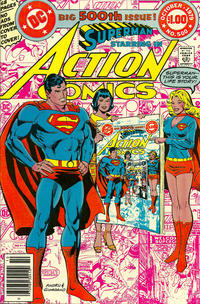 Action Comics #500 (July 1979): My first anniversary issue! I really wish I still had this issue. I remember really liking the cover within a cover in a cover concept. But that’s all I can recall about this. Oh, and at some point, I think I stapled the spine to keep the cover on. It’s funny that here I am over 30 years later and Action Comics is about to hit 900.

DC Comics Presents #14 (July 1979): I loved the hell out of this comic. Superman AND Superboy together in one story? And Superboy is trying to kill his future self?! WTF? Okay, it was really Pete Ross, driven a little bit crazy with revenge, who switched bodies with his childhood friend. But this was a good story, and I think the first I’d read where a friend of a hero (Pete) turns bad (at least for a bit). It was only within the last year that I read why Pete was driven to try and kill his friend, and that whole story is pretty good, too from the Showcase Presents collection). And I really love that cover–all the blue and the green just looks cool. I specifically remember taking this comic with me to read when I went to spend a few weeks with my cousin, who lived in the Seattle area.

Marvel Team-Up #86 (July 1979): And here is where I fell in love with the Guardians of the Galaxy. I was introduced to them in Avengers #177, but here I get to know them a bit more. Man, I wish I had this issue too!

As far as I know, those are the comics I bought during this time in 1979, but there are quite a few I recognize as well. First are the ones published in June: