My wife and I went to the Emerald City ComiCon last weekend. I’ve been threatening to go for the last three years, but finances and other commitments had prevented me from going previously. However, after I couldn’t go again last year, I told my wife I wasn’t going to miss this year’s con.  So we bought tickets and went. What a great time. This was the first comicon I’d been to since San Diego in 1996 and I cannot wait to go back to Seattle for this wonderful event.

Here are some quick bits about my experience while there.

My god, so many people!

I stood in line to get the ECCC t-shirt and charity artbook for quite a while. I missed the first (movie) panel, but made it to Wil Wheaton’s Awesome Hour (and it was indeed). (Apologies for the grainy photos.) 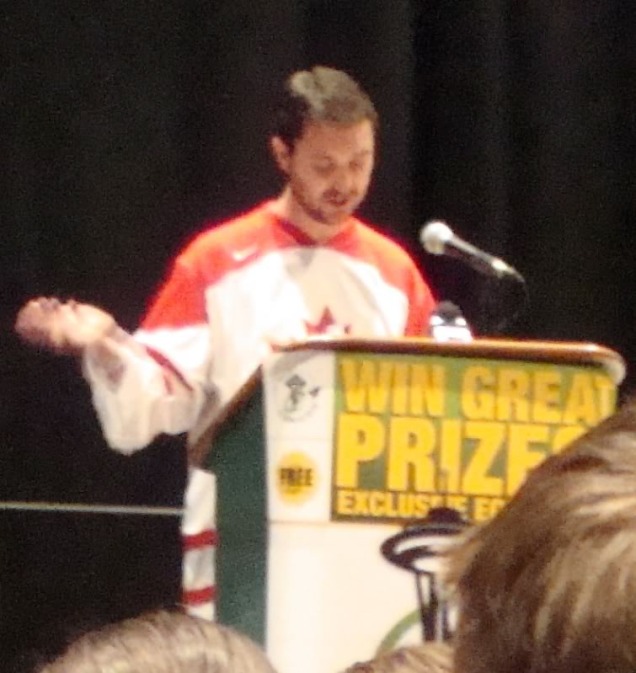 After Wil came Leonard Nimoy. He read a poem from one of his collections and then answered questions for the rest of the hour.

My wife had convinced me to pay the $$$ to get our picture taken with Mr. Nimoy, so we got in line again. The picture taking was over so fast! Mr. Nimoy said hello and thank you, and we were out. There was some screw up with the printing, so we’re still waiting for our picture with Mr. Nimoy. I’m glad I was able to see and listen to Mr. Nimoy. I’m a huge Star Trek fan after all. In fact, I was a Star Trek fan long before I got into comics, so i couldn’t pass up this opportunity. However, ECCC10 did schedule Mr. Nimoy at the same time as the DC Nation panel, which I really, really wanted to attend. Next year I suppose.

Then I went to attend the Green Lantern panel and mostly listened to Geoff Johns answer fans’ questions (I felt bad for other panel members). I found out that death will mean something in the DCU again (but we’ll see). Geoff did say that death and rebirth shouldn’t be a way to revitalize a character–good writing should. Well put, sir.

I spent the rest of the time getting autographs and talking with one of my bestest friends, Travis, who brought his family with him to the show (they are all comic fans) before we headed out for dinner.

It was very cool to meet and speak with (briefly) these comic artists and writers. I started with getting Alex Maleev’s autograph on Spider-Woman #5. He was very quiet, and he just didn’t seem into meeting his fans, but maybe he just wasn’t feeling well. Jo Chen was also very quiet, but she was smiling and seemed to be enjoying herself. Ben Templesmith was great. He had just signed a bunch of stuff for a fan that Mr. Templesmith didn’t even draw and was calling the guy out on it, but despite that he was friendly with me and just talked for a few moments. Without prompting (which I wasn’t going to do anyway), he told me that more Fell is on the way. Next up was meeting Geoff Johns. He had signed my copy of Adventure Comics #2, noticed that my wife was taking pictures, and asked if I wanted a picture with him! What an awesome guy. I then met J. H. Williams III, who right before that was talking to another artist nearby. It was obvious that Mr. Williams was a fan and it was cool to see that. After Williams signed Detective Comics #854, I asked Greg Rucka to do the same, as well as Dave Stewart, the colorist. Then I got in a long line to have Brian Michael Bendis sign the same issue that Mr. Maleev did. Mr. Bendis was friendly, but seemed distracted. I also met Mark Waid who signed my copy of Incorruptable #1. I wish I had brought my copy of Kingdom Come to have him sign, but there’s always next year!

Finally, I met some of the guys from the Comic Geek Speak podcast. They were great to talk to. Peter actually offered his hand, which I noticed most of the talent did not do (and understandably–I’ve heard stories about the Con Crud), asked me where I was from, and how long I’d been listening to the show (since June 2006!). I asked them to autograph my ECCC exclusive Monsters & Dames charity artbook–thanks Peter, Brian, Pants, & Murd!

I have to admit, there were times after meeting some of these people that I was on the verge of trembling, I was so excited (of course, part of that was lack of food–we had no time to eat lunch on Saturday). I’m not someone who normally is overcome by a personality, but I was damn close that day. As I told my wife, some of these guys are like rock stars to me.

I spent the first two hours of the day shopping for comics, and for part of that time my lovely wife stood in line to get an autograph from Wil Wheaton. 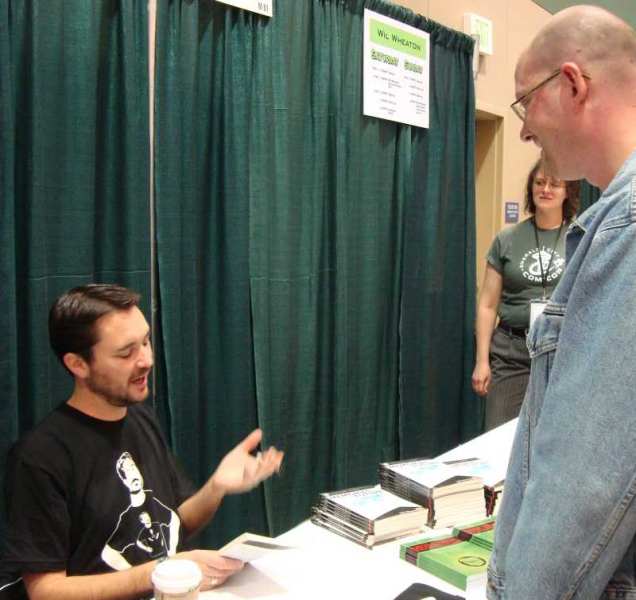 After that was done, both of us hunted for books I’ve had on my wish list for a while. I scored a bunch and completed a couple runs (the Levitz Legion of Super-Heroes run, the Byrne Superman, & some issues of Daredevil from the 80s). Then it was time for the DC Sunday Conversation panel.

After that panel we grabbed some food (our experience the day before left us a little bit wiser). And then back in line to get a photo taken with Wil Wheaton. The guy is just awesomely cool! If you are so inclined, you should check out his podcast, Radio Free Burrito, to get a taste of the Wil.

Then I strolled down the Star Trek memory alpha lane with Larry Nemecek who wrote the TNG compendium. That was fun, but watching Wil Wheaton play Rock Band with some enthusiastic fans for a while was a nice capper on the whole weekend.

Very sad it’s over, but looking forward to next year. Yes, there will be a next year!